(Please scroll down for the original English article)

On December 3, the Chinese state detained more than 20 people associated with various labor solidarity organizations in Guangdong province. The detainees had been active in the labor movement there, providing various services and training. The government crackdown comes amid a rising tide of strikes and protests in Guangdong.

Ellen David Friedman, a long-time organizer with the National Education Association in Vermont, founding member of the state’s Progressive Party and member of the Labor Notes Policy Committee, has been working for the last decade with labor and union activists in Hong Kong and the mainland. When she was in China recently, she was briefly detained and interrogated by the government. She spoke with Ashley Smith about the crackdown, its causes and what activists can do to help the Chinese activists win freedom and justice. 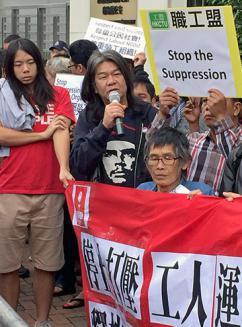 DURING YOUR recent trip, you were detained amid the crackdown on labor NGOs. Can you tell us what happened?

I’VE BEEN working in China for about 10 years, teaching labor studies and participating in various parts of the labor movement. I’d received many warnings before, but they had always been indirect, and passed along through colleagues. This was the first time that police came to question me directly.

They came to my hotel and interrogated me for about two hours–quite politely–but warned me to stop “meeting people” or risk legal consequences. They said I was violating the terms of my visa.

It’s hard to know if I was detained as part of the crackdown on activists. It happened in the same period of time, but one never knows the reason that things happen in China. Certainly when I was detained, they didn’t give me any explanation for it. So I think at best we can guess.

The context for this is that, since the start of the Xi Jinping administration in China three years ago, the state has taken a very definitive turn away from tolerance of any kind of activism and organizing in civil society. In the previous administration of Hu Jintao, there seemed to be a good deal more space for the development of NGOs and critical discourse and research. All of this under the Xi Jinping government has been very severely curtailed.

Since Xi came to power, the state has harassed labor NGOs, criminalized labor resistance, and detained and charged worker activists. The government has also conducted an “anti-foreign influence” campaign. And so, since I’ve been active in the labor movement in China during this period of time, and since I’m a foreigner, we can only say it’s consistent with their policy.

WHAT’S THE scale of the crackdown? Who is being targeted?

THE MOST recent event was a high-profile detention of about 20 activists on December 3, all in Guangzhou, which is one of the largest cities in China. It’s on the southeast coast across from Hong Kong. It’s the capital city of Guangdong province, which was the birthplace of capital and labor markets beginning in the 1980s.

Since then, it’s undergone a vast amount of development. Tens of millions of migrant workers have moved there to get jobs. The area has also experienced an explosion of labor resistance. Around a dozen or so labor NGOs have been operating amid this worker activism.

The government targeted the activists associated with four of these labor NGOs. Some of these NGOs are pretty benign service organizations that do things like assisting injured workers to file worker’s compensation claims. Some of them are more actively involved in helping workers to develop skills for leadership and collective bargaining among those who have taken the lead in strikes and so on.

Most of the people were questioned and released within a day, but seven people are still detained and facing criminal charges. The most prominent person who was caught in the sweep is named Zeng Feiyang. He’s the founder and director of the oldest and best-known labor NGO in China, Panyu Workers’ Center.

The government has accused most of the detainees of disrupting public order, which is the usual allegation made against labor activists. They have charged one person with embezzlement. Solidarity activists have arranged for them to have attorneys–in fact, there is a now a 60-member attorney team that has volunteered to represent them–but so far, they haven’t been able to contact the detained activists. So we still don’t know the specific charges against them.

IS THIS crackdown in response to an increase in strikes in China?

I THINK so. There has certainly been a notable rise in strike activity, which may be largely in response to China’s slowing economy. This has led to a high number of factory closures and relocations, which means job losses for workers. Bosses have also run away from their legal obligation to pay severance compensation when a factory shuts down.

Workers who have lost their jobs are also discovering that their bosses had not been paying for their social insurance–that is, social security or pensions. Many of these workers are in their 30s and 40s and are now facing the prospect of returning to their home provinces, towns and villages with no pension. All of this is the source of a lot of the recent protests and strikes.

But it’s also part of a longer-term pattern of rising labor militancy over the last 15 years. All of these strikes and protests have remained relatively atomized. Workers have not been able link up their struggles, but people have, of course, started learning from all of the experience.

As a result, the strikes have changed in character. They have become more confident and more strategic. Workers are learning more about collective bargaining. They’re learning more about how to interact both with capital and the state. That has definitely posed a threat to the government.

It’s also impacted the state’s official union, the All-China Federation of Trade Unions (ACFTU). It’s not really a union at all, but mainly a tool used by the government for labor control. It doesn’t represent workers, but mainly the employers. Workers don’t trust it all. So workers, especially migrant workers, now really understand that they have to build their own organizations.

So there’s more discussion than I have seen in the past about the need for something like an independent trade union. Of course, that’s crossing a line in China. The government won’t tolerate that, so this may also be a reason for more harsh repression.

WHAT IS the situation of the Chinese economy, and how is that shaping worker’s struggles and consciousness?

THE ECONOMY of the country is very big and complicated. There’s no question that the collapse of exports in 2008 led to an immediate and very, very sharp recession. It was said that something like 75,000 factories closed their doors in a two-month period in 2008–just in Guangdong Province.

There was recovery in the Chinese economy because of the government’s vast stimulus plan. The state pumped a lot of money into infrastructure development, particularly in the inland provinces. So there has been lots and lots of construction of roads and dams, power facilities, ports, trucking depots and so on.

But all of this was predicated on the expectation that the country’s export sector would recover. That didn’t happen. So now all of this infrastructure development, based on the idea of continued export manufacturing, is now just overcapacity. China already had a problem of overinvestment, overproduction and overcapacity. After the stimulus, it’s far worse than before.

On top of that, the state has been largely unable to stimulate the kind of domestic consumer demand to compensate for the drop in exports. A middle class has developed, which is buying lots of cars and luxury apartments. But it isn’t very broad, and it certainly can’t make up for the drop in international demand.

So with the economy slowing, people, even much of the middle class, are scared to spend money if they have it. Instead, they’re saving it to pay for necessities like housing, health care and pensions, which the state doesn’t provide. As a result, the state hasn’t been able to stimulate domestic consumption to replace the drop in exports.

Finally, the state has developed a long-term plan to drive investment and development inland from the East Coast cities, with the hope that many migrants would return to their former homes.

But because the government is also loosening the household registration requirements, a lot of migrants aren’t going back home. They’re staying in the coastal cities. As a result, the state’s inland development push has built ghost cities, with giant housing complexes standing empty and unused.

HAVE WORKERS started to build new organizations to mount resistance amid the slowdown and repression?

Here’s an example. I’ve been associated with Sun Yat-sen University in Guangzhou for the last 10 years. In the period of relative liberalism under Hu Jintao, we managed to start an international labor center within the School of Government. We conducted research involving labor scholars, trade unionists, economists, historians and labor lawyers, including both Chinese practitioners and foreign practitioners. That produced a lot of really wonderful research, classes and workshops.

The authorities shut it down last year. They gave no reason–they just closed it, all of sudden. The scholars, students, activists and workers who knew one another through the program have tried to stay in touch and continue our work. But we can’t do it in a formal way any longer.

The Labor Center clearly provoked concern among the authorities. When I was detained and interrogated, they asked me about the Labor Center, as if it was still ongoing. I said to them, “You know it was closed last year. There is no more Labor Center.” But they persisted. They asked me, “When you were in Guangzhou, who did you talk with? Did you meet with your colleagues? Why did you meet with former students?”

That gives you a sense of the scale of scrutiny that activists are under. People’s e-mails, phones and meetings are all surveilled. Even when people use social media, which they do a lot, it suffers almost immediate censorship. So while there is a robust international solidarity campaign on behalf of the detained labor activists, there is nothing like this going on inside China itself. It’s virtually impossible to even get information about the detentions there.

WHAT CAN unionists and activists in the U.S. do to help with the defense campaign?

PEOPLE CAN do a number of things.

There are several good websites for more information. You can follow the solidarity efforts on Free Chinese Labour Activists, Red Balloon Solidarity or Chuang. There are also petitions circulating, including one for organizations and individuals that was initiated by the Hong Kong Confederation of Trade Unions and picked up by LabourStart.

For those at universities or foundations with connections to China, there are opportunities for people to work through them to raise questions about the detentions.

There are some key organizations in various cities that activists can reach out to help with solidarity actions. In San Francisco, the key organization is the Chinese Progressive Association. There’s a group in Seattle called the Pacific Rim Solidarity Network, or PARISOL, which is also doing some important work. In New York City, there is the Committee Against Anti-Asian Violence.